What is an avalanche probe?

An avalanche probe is a rod that’s used to poke through avalanche debris in order to find a buried victim.

Resembling a collapsible pole for erecting a tent, an avalanche probe is what rescuers use to search for someone beneath the snow, hopefully after they’ve quickly located the person by sight or by using avalanche beacons. An avalanche shovel, the other essential piece of safety gear for backcountry skiing and snowboarding, can then be used to extricate the victim. 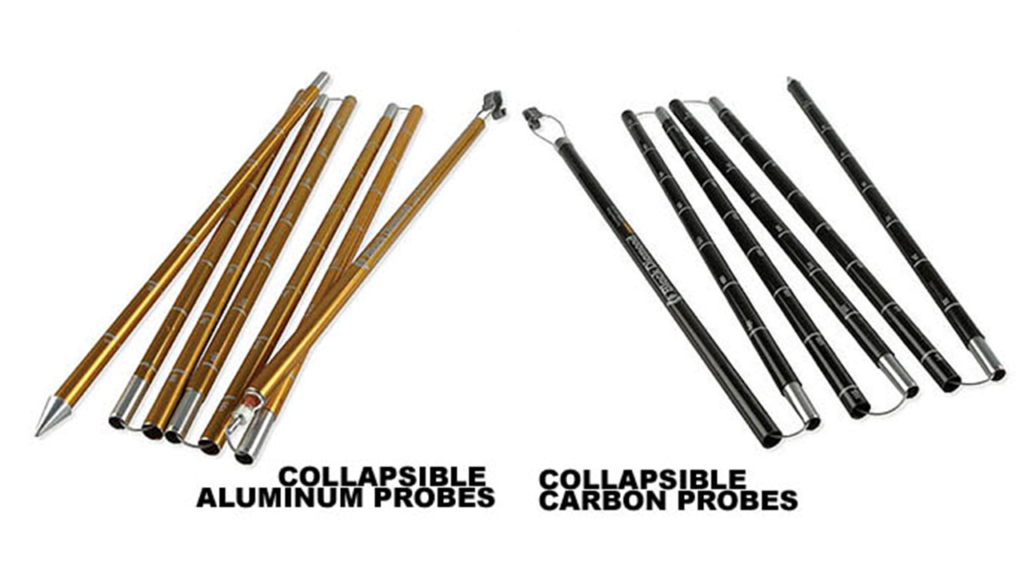 Avalanche probes are usually made of aluminium or carbon. Source: National Avalanche Center

Aluminum or carbon? Which size?

One of the main choices that consumers face is the type of material used to make the poles. Carbon probes weigh less but cost more than aluminum models, which may be more durable.

Here’s how the website evo.com breaks down the pros and cons:

Another buying consideration is the length of the probe when assembled. Models are often labeled with a number that indicates the size in centimeters. For example, the Backcountry Access Stealth 270

is 270 centimeters, which is 2.7 meters or nearly 9 feet when put together. Longer poles can probe deeper, but they may be harder to fit in a backpack.

Probes typically come with length measurements on the shaft, which can be useful for measuring the snowpack.

Below are some instructional videos on YouTube that explain how to choose and how to use an avalanche probe.

Evo.com explains the basics of buying a snow probe:

Backcountry Skiing Canada shows how to use avalanche probes:

Don’t let this page be your guide to traveling safety in avalanche country! As the National Avalanche Center says, get the training, get the advisory, get the gear, get the picture, and get out of harm’s way!  And lest you be tempted to venture into the backcountry unprepared, here’s how the center describes what happens if your rescuer(s) can’t immediately find you with a probe:

If, you have not had any success after, say about an hour, then it’s time to send someone for help. An organized rescue team will come in with search dogs and if the dogs can’t locate the victim then they will form larger teams of probers to cover the entire area. If they have no success with probes and dogs after several days–which is common with very deep burials–they will have no choice but to leave the victim to melt out in spring. And yes, the price of a beacon is always better than putting loved ones through that.

Some people balk at the price of an avalanche beacon (a few hundred dollars) but an avalanche pole is cheap by comparison. Check out some of the links below from Amazon and you’ll see that some models cost less than 50 bucks.