What is a face shot?

A face shot occurs when snow sprays a skier or snowboarder’s face on a powder day. The snow must be deep and light enough (e.g., blower, Champagne Powder®) and the rider must have sufficient speed to elevate the snow to face level. 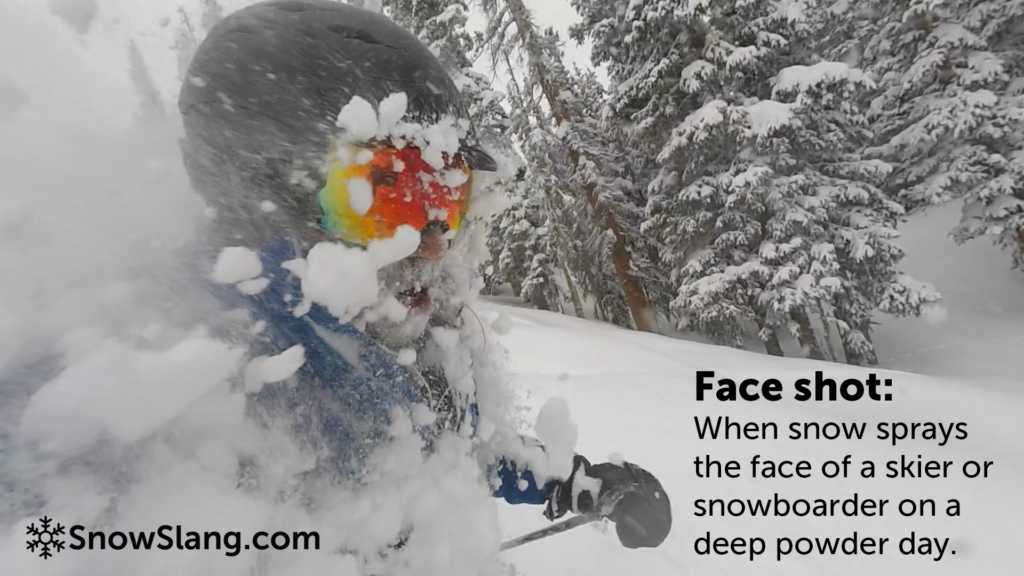 I took the shot above with a GoPro camera attached to the end of my ski pole. I was skiing the Mine Dump trail at Copper Mountain and found the tops of the moguls to be the perfect spots to trigger the face shots. Here’s an animated GIF from that sweet run:

Epitome of the powder day

Here’s a video I made of a crazy day at Loveland Ski Area in Colorado that included multiple face shots, as well as me being run over by an out-of-control skier bombing down the slopes.

All powder, all the time from Mitch Tobin on Vimeo.

How to get face shots (while skiing)?

As noted above, the quality and depth of the snow are critical ingredients in the making of a face shot. I made the diagram below to explain how these two factors interact. I think about 6 inches is the minimum amount of powder needed to generate a face shot, but it has to be super light powder. Beyond a certain point, the snow can get so dense and heavy (e.g.,  the Sierra Cement common in California) that face shots simply aren’t possible. 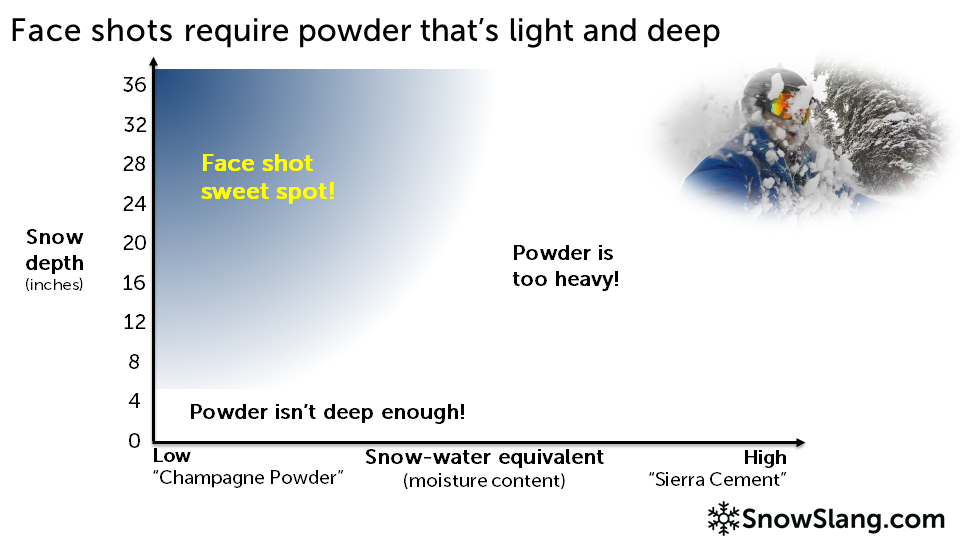 Is there a powder face shot technique?

The consensus among powder pigs is that the best way to wallow in the white stuff is to make ensure you’re hitting the deepest pockets of snow with enough speed, which means steep slopes. If you lean back on your skis, your tips will float to the surface, which can be helpful in maintaining speed, but that surfing motion isn’t conducive to making the swerves or turns that kick the snow up into your face. This is why I find a mogul field to be a great place for generating face shots: by banging off the bumps, you elevate the pow. Similarly, I’ve enjoyed many face shots while tree skiing because you’re forced to make lots of turns.

You’ll obviously want to be wearing goggles while in face shot territory. If you’ve got a beard or mustache, be prepared for the snow to stick to your face and for you to start resembling a Yeti!

Mitch Tobin, the shreditor in chief of SnowSlang.com, is a journalist, multimedia storyteller, and avid skier/snowboarder. After working as a reporter at the Napa Valley Register, Tucson Citizen, and Arizona Daily Star, Mitch was communications director at California Environmental Associates and then started Sea to Snow LLC to provide consulting services to a variety of clients. He graduated from Yale with a bachelor’s in Ethics, Politics and Economics and earned a master’s in political science from U.C. Berkeley. Follow Mitch on Twitter @mitchtobin