Sick day, as in ski sickness (aka Häusler’s disease)

Ski sickness is a form of motion sickness that can strike skiers, especially when visibility is poor in fog, blizzards, whiteout, and flat light conditions.

The disorienting, dizzying, and nauseating feeling, which is similar to sea sickness or car sickness, is due to the body’s inability to make sense of a barrage of conflicting stimuli.

Prior to this season, I’d only experienced the vertigo of ski sickness a couple of times. But in a bizarre coincidence, I felt it three times in a row this spring while skiing at Loveland here in Colorado.

In two of the cases, I was in a fog bank at the very top of the ski area, which marks the Continental Divide and rises to around 13,000 feet in elevation. The photo below shows what the conditions were like on Lift 9, heading up to the ridge, and this was before it really got foggy! 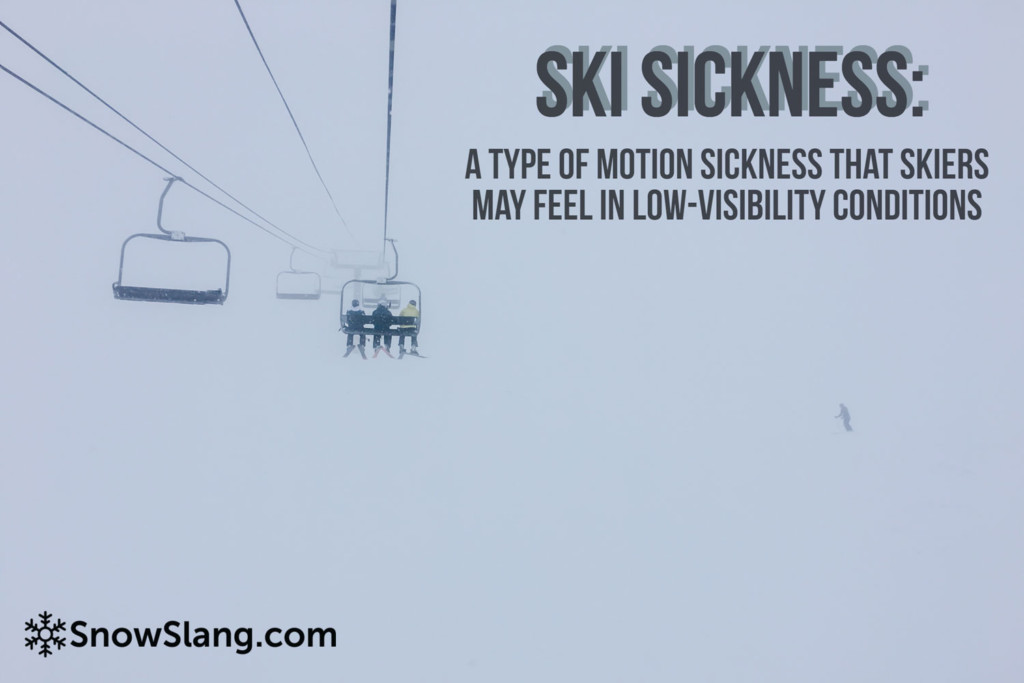 I can’t say I enjoyed the feeling of ski sickness, but in small doses the sensation is intriguing. Suddenly, you feel like you’re falling-down drunk!

The nausea part? Not so much fun. And there’s the issue of having to ski down a mountain with your sense of balance totally out of whack. In the fog bank at Loveland, my visibility was measured in inches. Above treeline, with snow covering all the rocks, my eyes couldn’t latch onto anything. It was a little hairy as I descended a 40-degree pitch without being able to see where I was going. Fortunately, the fog thinned as I lost elevation, and as I was able to get closer to the chair lift.

The next time I was at Loveland, I could overhear a guy on the chair behind me describing the fog and his ski sickness from a few days before. At the top, I mentioned my own experience and he said his friend was so nauseous that he had to retreat to his bed for hours. Now that’s a sick day!

Another time I experienced ski sickness at Loveland, it wasn’t foggy and only snowing lightly, but oh how the wind was blowing! That caused whiteout conditions and a ground blizzard. As in the fog, I couldn’t see shit and started feeling like crap until I got down to some trees and the visibility improved. Thankfully, all of my episodes of ski sickness have only lasted a couple of minutes. 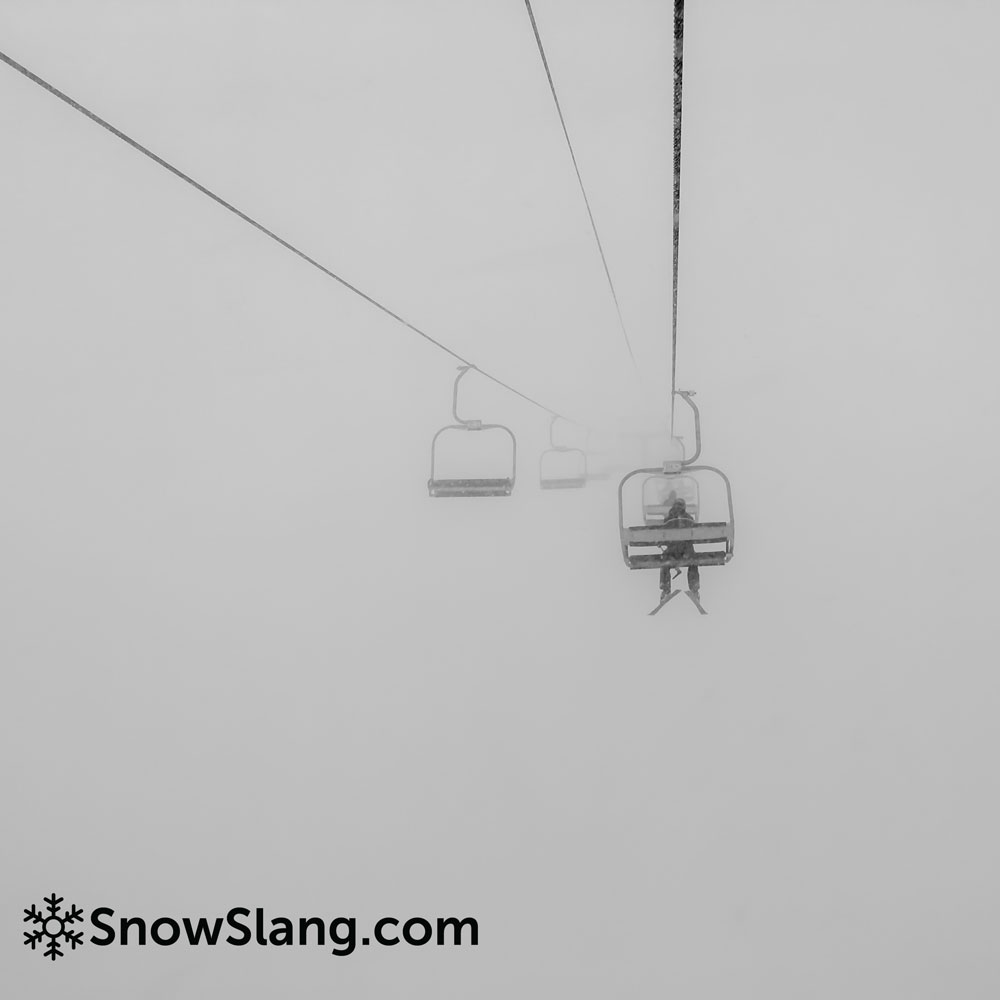 Ski sickness was first described scientifically in 1994 by Rudolf Häusler, a professor in the Bern University Hospital’s ear, nose and throat department.

“Many people can develop ski sickness by skiing, but people who are sensitive to motion sickness in general are especially prone, ” Häusler told the Swiss news site swissinfo.ch. “It appears on so-called white days, when the visibility is less good, [and] when you don’t see the surroundings or contours. This gives contradictory information [to the brain].” Here’s more from the informative article:

Häusler first came across the phenomenon when patients came to him complaining of dizziness, lightheadedness and even nausea experienced while skiing.

He soon discovered that his charges had not fallen foul of Switzerland’s white wines, but were serious. One day, while standing still on steep slope in foggy conditions, he suddenly got a sensation of movement.

As the professor shifted his body weight to initiate a turn, he crashed to the ground, still on his original spot. Häusler then got a sickening feeling in his stomach.

The incident awoke his interest and prompted him to study in detail patients who reported the symptoms. In his study, he focused on 11 people, and now guesses that around 10 percent of skiers suffer the illness at some stage.

Häusler’s 1995 paper, in the journal Acta Oto-Laryngologica, argued the disorientation is not only due to vision problems but also the effect of making turns on an uneven surface, which messes with the vestibular organs in your inner ear that regulate your balance. Here’s the article’s abstract (with a couple slight spelling corrections from me):

Dizziness with illusionary rotatory or pendular sensations and disequilibrium accompanied by nausea and occasionally by vomiting may appear during down-hill skiing. It is proposed that the condition is called “ski sickness”. Ski sickness seems to represent a special form of motion sickness produced by unusual and contradictory sensory information between the visual, vestibular and somato-sensory system. The pathophysiology seems to be related to vestibular overstimulation from winding turns on uneven ground, insufficient visual control, especially on foggy days with reduced visibility (on so called “white days”), often in connection with minor ophthalmologic problems such as myopia or astigmatism and altered somato-sensory input due to the wearing of ski boots and skis.

The impact of wearing boots and standing on skis surprised me. Apparently, tight boots fastened to two planks will trick your body by depriving it of sensory feedback. It also sounds like some skiers will experience the sensation without being in a blinding blizzard or dense fog. A day with flat light, in which there are no shadows and low contrast, can also make some people feel queasy and dizzy.

I don’t have a term for it, but I’ve also experienced a similar, but more pleasant feeling following a long day of skiing, especially while lying down and closing my eyes. It feels as if I’m being rocked back and forth, on a gentle, persistent wave. We’re not talking bed spins from a heavy night of drinking, but more like sleeping on houseboat or water bed.

The easiest way to avoid ski sickness is to avoid or escape from the offending weather conditions. But let’s be honest: storm skiing separates the diehards from the poseurs! Anyone can enjoy riding in 8 inches of fresh pow on a bluebird day with the sun shining and the birds singing. It’s only true ski bums who are willing to thrust themselves into the maw of mother nature and still ski when it’s freezing, dumping, nuking, puking, or just plain lousy weather with crappy visibility.

If you suffer from ski sickness, standard medicines for travel sickness, such as Dramamine, may help quell the queasiness. During a whiteout or blizzard, it also helps to ride near trees, ski lift towers, or other stark objects that can orient you. You should also check out Backcounty.com’s helpful article on how to ski in flat light conditions.

I’m curious to hear from readers about their own experience with ski sickness, so feel free to comment below or drop me a line.